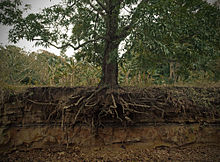 My generation was captivated by the drama of Alex Haley’s Root’s saga and thousands of young adults like myself discovered a new hobby in genealogical research.

Now, we are serenaded with the lilting sounds of roots music that carry us back to an earlier time in American life before the assault of electronic music and the pulsating excretions of rap, rock, and rave.

The Latin word for root is “radix” from which we derive the adjective, “radical.” If something is radicitus it is characterized as “by the roots, utterly.”

When I hear the deeply rooted laments of rhythm and blues, the joyful jesting of bluegrass, and the gutsy gospel of the back country,

I think of our rootedness in Jesus Christ. I am led to consider what radical and transforming truths are at the heart of what it means to be the church.

As we confront the challenges of of our time against the backdrop of COVID 19, emerging awareness of inequities and injustice, 9-11 despair, global warming, and sharp divisions ideology, the church must adapt in methodology and delivery without compromising the heart of its message or the core of its identity.

In times of radical change, we must become more rooted and more radical in the essence of who we are and what we are called to be.

Coming out of Ephesians 3:14-21, the idea of being a ROOTS Church that is established in the ancient truth of God’s Word and relevant to the moment emerged

Roots churches are about relationships. “...rooted and grounded in love ...” I John 4:11 reminds us that we are called to “love one another.” Our core relationship is vertical, with the Father, through Jesus and our horizontal relationships radiate outward from the core.

All roots churches are driven by their purpose “...for this cause...” Acts 6:7 illustrates the priests becoming “obedient to the faith.” We are a subversive people with a radical message, called to a radical lifestyle that does not imitate the world, but Christ.

Roots churches are not just seeker-sensitive, they are made up of seekers who continue to seek God with open hearts for as long as they live. “...that Christ may dwell in your hearts by faith ...” Thus, the open-faced “beholders” of the God’s glory in II Corinthians 3:18 being changed by degrees. This is worship and seeking—awe in the presence of His glory!

Roots churches are agents for God’s immeasurable power to transform lives, and communities. “...to Him who is able ...” Acts 17:6 describes “... These who have turned the world upside down...”

Roots churches have keen receptors to God’s love at work in the midst of their times. “...may be able to comprehend ...”

Jesus indicted the people of His day for not being able to discern the times. (Matthew 16:3) and speaks to us from Heaven saying, “He that hath ear, let Him hear what the Spirit is saying to the churches.” (Revelation 3:7 ... And repeated)