The Sixteenth Day of Advent - Taking the Mantle 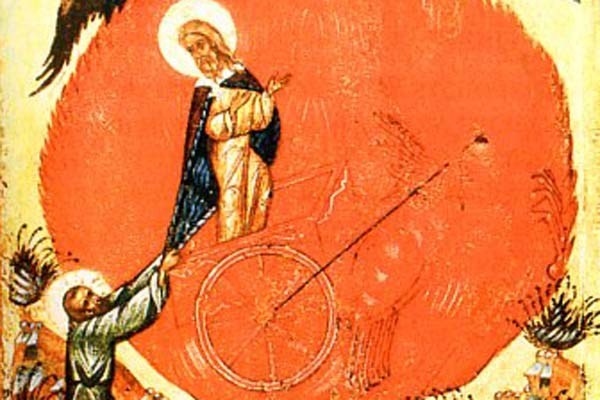 Those who trust in the Lord are like Mount Zion,
which cannot be moved, but abides forever.
As the mountains surround Jerusalem,
so the Lord surrounds his people,
from this time on and forevermore.
For the scepter of wickedness shall not rest
on the land allotted to the righteous,
so that the righteous might not stretch out
their hands to do wrong.
Do good, O Lord, to those who are good,
and to those who are upright in their hearts.
But those who turn aside to their own crooked ways
the Lord will lead away with evildoers.
Peace be upon Israel!

Whom God raises up to walk in His ways, He makes strong. He lifts them up. He surrounds them. He entrusts them to increase and to lead because He leads them. God does good to those who do good. He is, to them, the God of peace.

To be the people of God is to be people who represent righteousness and truth. Such people have received a legacy that has been passed down through generations.

To be the people of God is to be prophets of God, messengers of truth and righteousness, bearers of the image of God, conduits of love and grace.

Sometimes there is an Elijah who fills such a role and he seems to be one of those solitary figures that can never be replaced. We see such a soul as being like Mout Zion, but we could never be that. We could never stand that tall.

He mentored a younger man who felt that way, Elisha.

When they had crossed, Elijah said to Elisha, “Tell me what I may do for you, before I am taken from you.” Elisha said, “Please let me inherit a double share of your spirit.”

He responded, “You have asked a hard thing; yet, if you see me as I am being taken from you, it will be granted you; if not, it will not.”

As they continued walking and talking, a chariot of fire and horses of fire separated the two of them, and Elijah ascended in a whirlwind into heaven. Elisha kept watching and crying out, “Father, father! The chariots of Israel and its horsemen!”

But when he could no longer see him, he grasped his own clothes and tore them in two pieces.

When he had struck the water, the water was parted to the one side and to the other, and Elisha went over.

When the company of prophets who were at Jericho saw him at a distance, they declared, “The spirit of Elijah rests on Elisha.”

They came to meet him and bowed to the ground before him. They said to him, “See now, we have fifty strong men among your servants; please let them go and seek your master; it may be that the spirit of the Lord has caught him up and thrown him down on some mountain or into some valley.”

He responded, “No, do not send them.” But when they urged him until he was ashamed, he said, “Send them.”

So they sent fifty men who searched for three days but did not find him. When they came back to him (he had remained at Jericho), he said to them, “Did I not say to you, Do not go?”

Now the people of the city said to Elisha, “The location of this city is good, as my lord sees; but the water is bad, and the land is unfruitful.”

So they brought it to him. Then he went to the spring of water and threw the salt into it, and said, “Thus says the Lord, I have made this water wholesome; from now on neither death nor miscarriage shall come from it.”

So the water has been wholesome to this day, according to the word that Elisha spoke.

Elisha could not bear the loss of his mentor and take his role unless he received a double portion of God's blessing on his life. It was not false humility. It was more like terror and desperation.

Yet, when the time came and Elijah was taken away, God came through and raised up Elisha as one like Mount Zion.

God's hand was mightily upon him. His works were powerful and his words were strong. He impacted his generation.

He was in a long line of men and women who received a commission and became forerunner types of an ultimate Messianic promise incarnate perfectly in Jesus' whose Advent we celebrate in this season.

After the resurrection, perhaps more than in the hours leading up to Christ's crucifixion, the disciples must have trembled with apprehension on what the ascension of Jesus might mean to them. How could they carry on with his mission? How could they represent him? Could they be like Mount Zion?

Jesus told them that it would not be a detriment to their work they he was going away. It would be a propellant because he would be with them by sending the promise of the Father, the Holy Spirit.

So, when their turn came, they were bold, passionate and effective as we see in this snapshot from the early days of the church.

“And now, friends, I know that you acted in ignorance, as did also your rulers. In this way God fulfilled what he had foretold through all the prophets, that his Messiah would suffer. Repent therefore, and turn to God so that your sins may be wiped out, so that times of refreshing may come from the presence of the Lord, and that he may send the Messiah appointed for you, that is, Jesus, who must remain in heaven until the time of universal restoration that God announced long ago through his holy prophets. Moses said, ‘The Lord your God will raise up for you from your own people a prophet like me. You must listen to whatever he tells you. And it will be that everyone who does not listen to that prophet will be utterly rooted out of the people.’

And all the prophets, as many as have spoken, from Samuel and those after him, also predicted these days. You are the descendants of the prophets and of the covenant that God gave to your ancestors, saying to Abraham, ‘And in your descendants all the families of the earth shall be blessed.’ When God raised up his servant, he sent him first to you, to bless you by turning each of you from your wicked ways.”

While Peter and John were speaking to the people, the priests, the captain of the temple, and the Sadducees came to them, much annoyed because they were teaching the people and proclaiming that in Jesus there is the resurrection of the dead. So they arrested them and put them in custody until the next day, for it was already evening. But many of those who heard the word believed; and they numbered about five thousand.

Generations of God's people and prophets come and go. We stand on their shoulders and launch forth from them.

The apex of it all is the coming of God in scruffy diapers, vulnerable and tiny. Flowing from that is the reality and hope that we can take up our mantles, follow him, and change the world.