The Fourteenth Day of Advent - Yet, I Will Rejoice 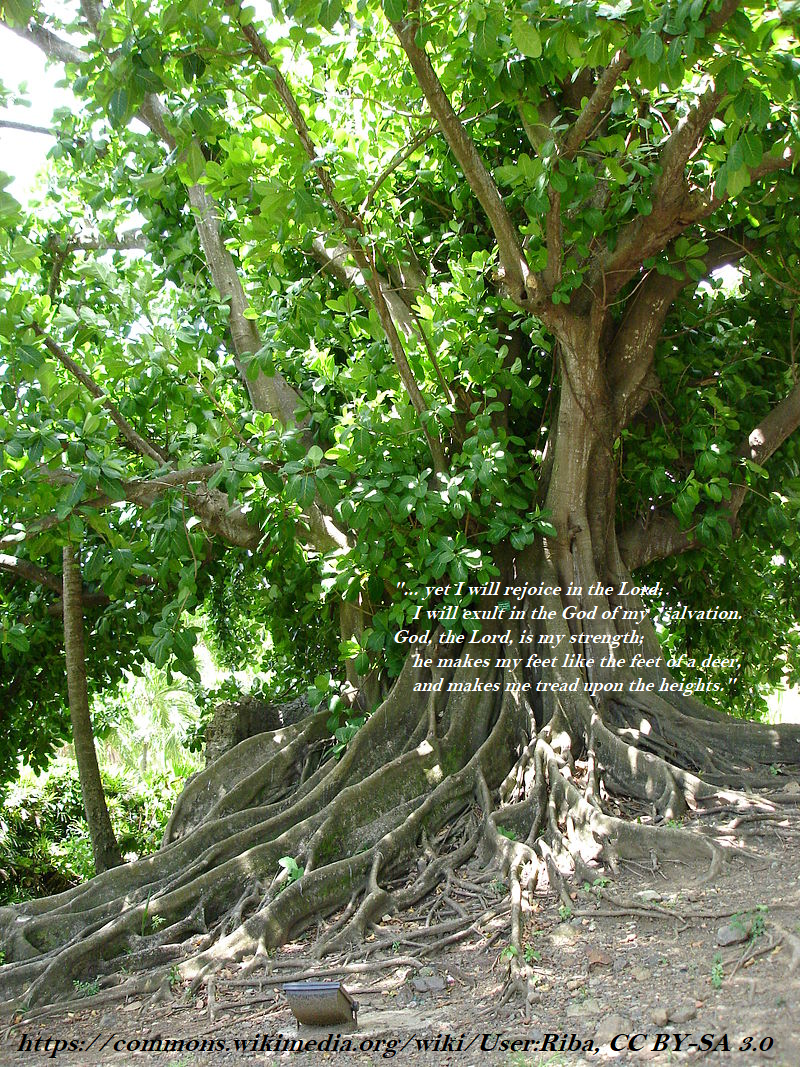 The Choice to Rejoice

"Yet" is a powerful word.

"Yet I will rejoice," is a powerful statement of faith and obedience in defiance of our circumstance.

You came forth to save your people,
to save your anointed.
You crushed the head of the wicked house,
laying it bare from foundation to roof. Selah
You pierced with their own arrows the head of his warriors,
who came like a whirlwind to scatter us,
gloating as if ready to devour the poor who were in hiding.
You trampled the sea with your horses,
churning the mighty waters.

I hear, and I tremble within;
my lips quiver at the sound.
Rottenness enters into my bones,
and my steps tremble beneath me.
I wait quietly for the day of calamity
to come upon the people who attack us.

Though the fig tree does not blossom,
and no fruit is on the vines;
though the produce of the olive fails,
and the fields yield no food;
though the flock is cut off from the fold,
and there is no herd in the stalls,
yet I will rejoice in the Lord;
I will exult in the God of my salvation.
God, the Lord, is my strength;
he makes my feet like the feet of a deer,
and makes me tread upon the heights.

To the leader: with stringed instruments.

Habakkuk invites the people to sing.

The first stanza of this hymn reminds us that God has come to save, but that His salvation comes in the midst of profound suffering, opressions, persecution, and tribulation. The Mighty God acts with decisive force and power to crush the enemy whose intention is to destroy.

The second stanza is an invitation to lament. Worse things are coming. What do we do? What can we do? We wait. Waiting becomes our response of faith and trust, even our act of obedience.

The third stanza is a reaffirmation of faith with a choice to rejoice. It is an inward call to exult, to praise, and to commit to the God of our salvation. It is God who strengthens us, God, who causes us to walk upon the rocky soils of life.

“What do you think? A man had two sons; he went to the first and said, ‘Son, go and work in the vineyard today.’ He answered, ‘I will not’; but later he changed his mind and went. The father went to the second and said the same; and he answered, ‘I go, sir’; but he did not go. Which of the two did the will of his father?” They said, “The first.” Jesus said to them, “Truly I tell you, the tax collectors and the prostitutes are going into the kingdom of God ahead of you. For John came to you in the way of righteousness and you did not believe him, but the tax collectors and the prostitutes believed him; and even after you saw it, you did not change your minds and believe him.

If I asked you how many groups Jesus described, you might say two.

However, I would suggest there were three.

The first two were in the parable. The third was in the application. First, there were those heard the call and refused, but later, they changed their minds, answered, and obeyed. Second, there were those who heard the call, gladly embraced it with commitment to go to the vineyard. Later, however, they were nowhere to be found. Finally, Jesus said, there was his audience of critics. They heard, refused, and never changed their minds. They persisted in their harness of heart, disbelief, and disobedience to the call.

These, Jesus said, would trail behind the dregs of society entering the Kingdom of God.

Belief, Jesus says, is about changing our minds.

As wise person gave us some advice once as we were adoptive parents of children who met many of our directives with bold, loud, and defiant objections. She said, "Don't engage with the words; wait and see what they do."

We tried it and it worked. The kids worked though their objections and we all avoided a pointless argument.'

God lets us vent, but His call remains to come and labor in His vineyard.

Faith and obedience are far more about what we ultimately do than what we immediately say.

Sometimes, when we hear, we are like the prophet, Habakkuk. We hear; we tremble within; our lips quiver; rottenness enters our bones; our steps tremble beneath us. We recoil at bad or unpleasant news. We resist it. We protest it, but we land in the place of faith where we declare, "Yet, I will rejoice."

It is the choice to rejoice.

"... yet I will rejoice in the Lord;
I will exult in the God of my salvation.
God, the Lord, is my strength;
he makes my feet like the feet of a deer,
and makes me tread upon the heights."

Jesus had a specific purpose for his parable. He wanted those who perceived themselves to be righteous, pious, spiritual, spiritually superior, and above others to know that their words, pronouncements, and positions did not impress God. He is impressed by the response of faith and obedience with our lives, even if it comes through the process of protest, struggle, and emotional turmoil. It is not how we start that matters most, but how we end.

We are granted permission to wrestle with the bad news, struggle with the demands of discipleship, and agonize over the call to faith because God knows they lead us to trust.

They lead us to rejoicing.

Advent is a time of struggle and anticipation as well as ultimate joy.